CHANGE isn’t easy but it is necessary, said Bishop Brendan Leahy, who has announced a “Team Ministry approach” for the Limerick Diocese.

It is to deal with the drop in the number of priests and need for greater lay engagement. It was outlined by Bishop Leahy in a pastoral letter read out at all parishes in the diocese at the weekend.

The move, which was signalled in the 2016 Limerick Diocesan Synod, will see existing parishes arranged into pastoral units. Teams of clergy will minister in each unit but existing parish identities will be preserved.

The new units will involve a number of parishes operating together, with two or three priests ministering together as a team to the pastoral needs of these parishes. Each of the priests will be a “co-parish priest” and will move around the pastoral unit, resulting in different priests saying Masses in parishes week on week.

The Team Ministry unit may also see one baptismal team for the whole unit offering preparation for parents bringing their child for baptism with the baptisms then taking place in the local parish church. There will be one pastoral council per pastoral unit made up of members of each of the parishes of the unit. Each parish then will have its own smaller working group.

In his pastoral letter, Bishop Leahy stated: “The main goal in establishing pastoral units and Team Ministry is greater co-operation between parishes. The hope is that there will be a greater critical mass of energy, competencies and lay volunteers at the service of a number of parishes. As the Irish saying puts it, Ní neart go cur le chéile – our strength lies in unity.” 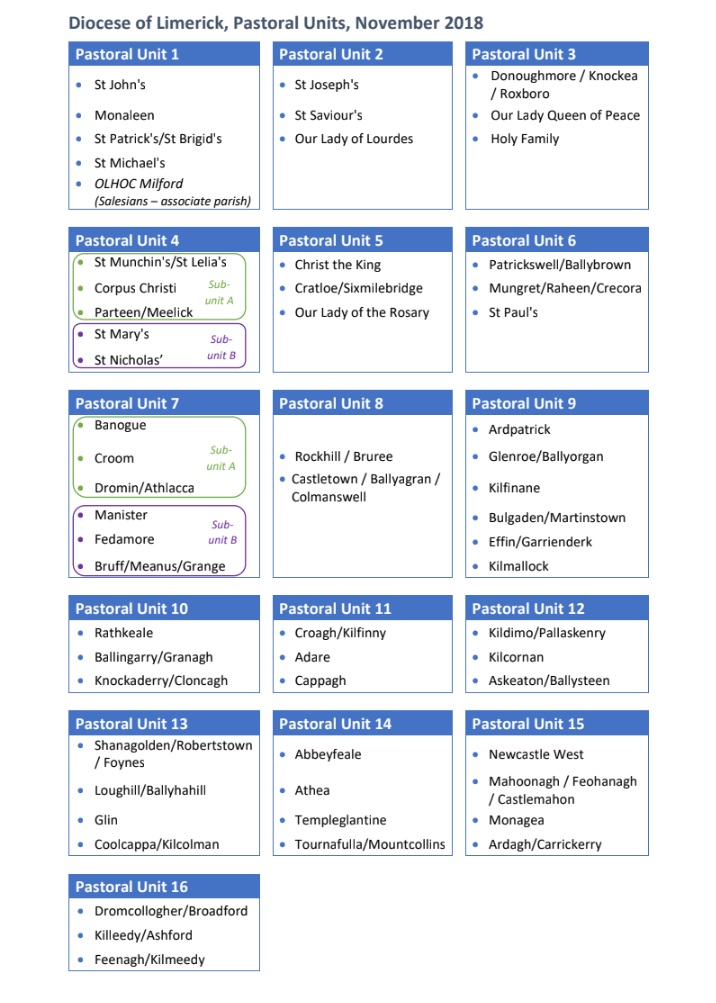 Bishop Leahy said that the establishment of the Team Ministry units has been necessitated by the considerable decline in the number of priests, the increasing age profile of priests and increasing demands, bureaucratic and otherwise, on priests today.

“In moving into the new arrangements, I believe God is at work. Change isn’t easy but just as it is necessary in our own personal lives, likewise in the Church we too constantly need to reform and renew our Church life,” said Bishop Leahy.

Fr Roy Donovan, of the Association of Catholic Priests (ACP), said while they understand and sympathise with diocesan authorities doing all they can with declining numbers of priests to provide the optimum service possible the reality is that “clustering parishes” in whatever form may be necessary in the short term but in the longer term it is little more than “kicking the can down the road”.

“We want to praise the bishop and the people of Limerick diocese for undergoing a synod. We applaud them for all their work and energy and involvement of so many people and so many parishes – that is the way forward,” said Fr Donovan.

However, he said it is just putting off major decisions that need to be made.

The parish priest of Caherconlish / Caherline says one of the disadvantages of the new system is different priests will be saying Masses every Sunday.

“People are not going to get to know priests, priests won’t get to know people. In the past, the key relationship has been the priest and the people – building that rapport,” said Fr Donovan.

With the average age of priests in Ireland nearing 70 there is also the increased workload for men of the cloth.

“A lot of them are going to be older guys and calling on ones who are retired. It is kicking the can down the road, it is not facing the reality. Is it a good enough quality of service we are offering people when we need younger minds and youthful energy? All that is being deprived in the present system in the church at the moment,” said Fr Donovan.

RNS – Religious News Service reports: A group of 60 Catholic Democrats in the House of Representatives, including Reps. Rosa DeLauro and Alexandria Ocasio-Cortez, released a “statement of principles” Friday…

Fr John Gribowich writes in the National Catholic Reporter, Nov 7, 2020: Bob Dylan explores death to self in ‘Rough and Rowdy Ways’ …Once again, the singer-songwriter does not disappoint,…

A medley of disparate sounds The rising sun: ‘That they may face the rising sun.’ (McGahern). I did that, this morning. It appeared over the horizon. It was a glowing…

Sharon Tighe-Mooney was stunned to read that Pope Benedict XVl had made the ordination of women a more serious “crime” than sexual abuse of children! She devoted herself to research the reasons for this and has published a very clear and readable book; ‘What About Me? Women and the Catholic Church’
Sharon will address this topic on Monday, 14 October, 2019 at the Mercy International Centre, 64A Baggot Street, Dublin 2: 7.30pm to 9.15pm

“Either we stop it or it stops us.” COP26: The two young lassies were noisy. Vinisha Umashankar and Greta Thunberg. Vinisha said: “We’ll build the future, even if you are…