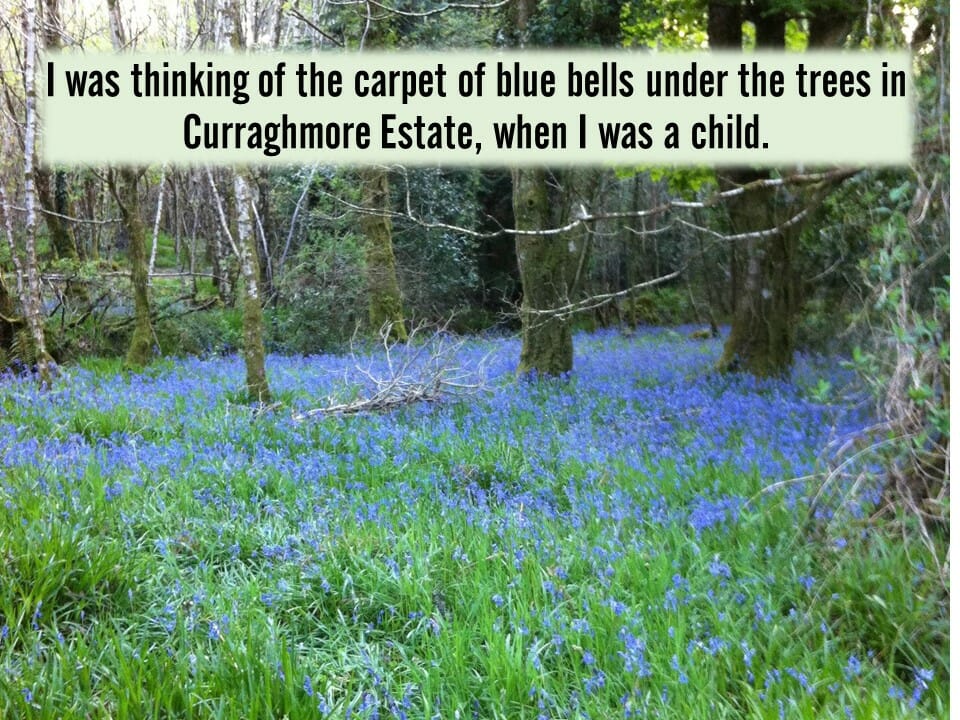 They peeped out at me or so it seemed. I wasn’t sure. They had vanished when I looked again. Was I imagining it? A text had come telling me of an explosion of blue. I thought she must be talking of Picasso’s blue period. But no. It was blue bells she had met on her walk. My heart woke up the memories. I was thinking of the carpet of blue bells under the trees in Curraghmore Estate, when I was a child. There was something luscious in this carpet at a time when carpets weren’t plentiful. In the language of flowers, the bluebell is a symbol of humility, constancy, gratitude and everlasting love. You knew that, of course? I didn’t. As I abandon my nostalgia, the Tolka remains my muse. I watch each morning to see if the cygnets have arrived. The ma is on the nest. The da is flapping around. The heron is standing guard or so it appears as he does his sentry duty. He came out to meet me yesterday on the pathway but remained taciturn. We greet each other nonchalantly. Every day is a revelation. We are blessed.

At times, I think of the blank page. It never bothers me for long. My fingers have no interest in my thoughts. They are free. They have their own mind. Ted Hughes wrote The Thought Fox and of his blank page which then mysteriously got written. As Ted Hughes comes to mind so does Sylvia Plath. She links for me these days with Darkness into Light. (Pieta House on the 7th May). And I remember so many who have died by suicide and all the families who try to cope. And I somehow want to cling onto light wherever it is to be found. The light in the parish community. The light of banter. The light of being at the heart of home and family. The light in honesty, humour and humanity. The light in friendship. The light of shared faith. Somehow we are indeed (and have to be) ministers of the light.

I like also to think of that other English Poet, Phil Larkin. I know many think immediately of the poem This be the Verse (on parents) but I rather like Church Going.  He takes off his bicycle clips ‘in awkward reverence.’ The ‘echoes snigger.’ He asks ‘when will the church fall completely out of use?’  He doesn’t know why he has to call into the church as he cycles his bike out from the Library in Hull. He comments then and says ‘and that much never can be obsolete.’ He saw into the future the fading relics of church life. But felt that something is missed and missing. He wrote this in 1954/55. But poetry is written daily by nature. Poetry is written by the beauty of Liverpool, Man City, Limerick in sport. Beauty is in the gestures. In the moments of miracles. In the privileges of parish life. In the soupcons of mystery and beauty and wonder and love.  Faith cannot be mundane but still has to rooted in the ordinary. We are blessed.

Election day has come and gone. Partygate is replaced by Beergate in the UK. Boris Johnson is rather pleased that another Boris has taken over the news for a time (Becker). There is a shock in N Ireland. Sinn Féin wins most seats. The DUP have thrown out their rattler from the pram. Doctrinal absurdities take over. They don’t seem to understand that their support for Brexit leads directly to some kind of Protocol. There is a suggestion of ‘eat your cake and have it.’ Theresa May reminded Jeffrey Donaldson in the Commons (10th May) that the very conditions he now wants he had rejected when she had proposed them. George Mitchell’s effort at ‘synodal pathway methodology’ has been flummoxed! But then the Francis’ recipe for a way forward (in church life) is much talked about with managerial-speak and jargonised into oblivion, whereas simple ordinary realities are neglected. Talk to each other. Respect each other. Listen. Believe in the God within. Courtesy.  Awe in the sacredness of the other. Gratitude. That easy ordinary version of church life is often defective among us. Everywhere. A new church can’t appear until attention is paid to the basics.

While this is going on, the new Maternity Hospital continues to be a big issue. It has become essential that there can’t be even a whiff of Religion or Religious around to contaminate this new venture. Past history is forgotten or maybe remembered too well by some. We have given great values to the country. We have created a great structure of education, of social care, of hospital life. We have handed it on as legacy and as gift. We are only remembered for what was wrong. Our certainties and absolutism especially on sexual matters was deeply flawed. What have we learned? To be very humble. What does that lead to? To the synodal ideas. But not into the claptrap of the latest guru. We need pastoral leadership everywhere and not administrators’ guff. Gentle, caring, warm and grateful hearts are the real Gospel values. We are blessed.

I spent twenty years in the UK and have now spent 25 years in Finglas. All those years were blessed. During my later years in the UK many women used to swoon whenever they heard Fergal Keane on the BBC. His voice. Did they listen to his words or his reports?  I think not. His voice wrapped itself around them. They were hugged. They were in ecstasy. Now I liked his Reports. His eloquence. The music of his language. His uncle surely passed on the baton. (John B Keane.) I think he is an excellent Reporter and Journalist. He had an article in The Sunday Times 8th May 2022. There was a Programme by him on Monday evening on BBC2 at 9. He presented the story of his PTSD. I think it was a very fine programme. He traced history. Even the famine. Even his grandmother’s experience in the fight for independence. His father’s alcoholism. His own alcoholism. His addiction to high risk and danger.

What was very important – was that he researched to understand what he was, and how he is, but didn’t blame the past. He knew that he had to step back. He has been in the Ukraine but hasn’t ventured into the danger zones. He has gone to where the refugees are congregating.  I wasn’t sure then how much he has stepped back. I wasn’t convinced of the REM treatment. I can’t see how such treatment can be done while a camera is recording everything. But the programme was revelatory. We are blessed.

She comes on the phone nightly. She is excited. She has lots of questions. She wanted to know everything on the 80 First Communions from last Saturday. What did they look like? Had they fat dresses? Was it true that a few had horses and white coaches?

I told her that all was true. The children were marvellous. I don’t know how they have learned so much. They said prayers that I know but couldn’t say without the book. They sang with utter conviction. It was a command performance. Indi asked me if they would continue to grow and learn and be so powerful and wonderful. I had to tell her that the rate of growth slows down but that Holy Communion marks a very special moment in their development. Her next question was fair:  What were the boys wearing? Indi was certain that she would never wear one of those big dresses. She felt that they would get in the way of the mischief she likes to get up to. Her last word was a question: Where is God in the middle of all of this? We are blessed. 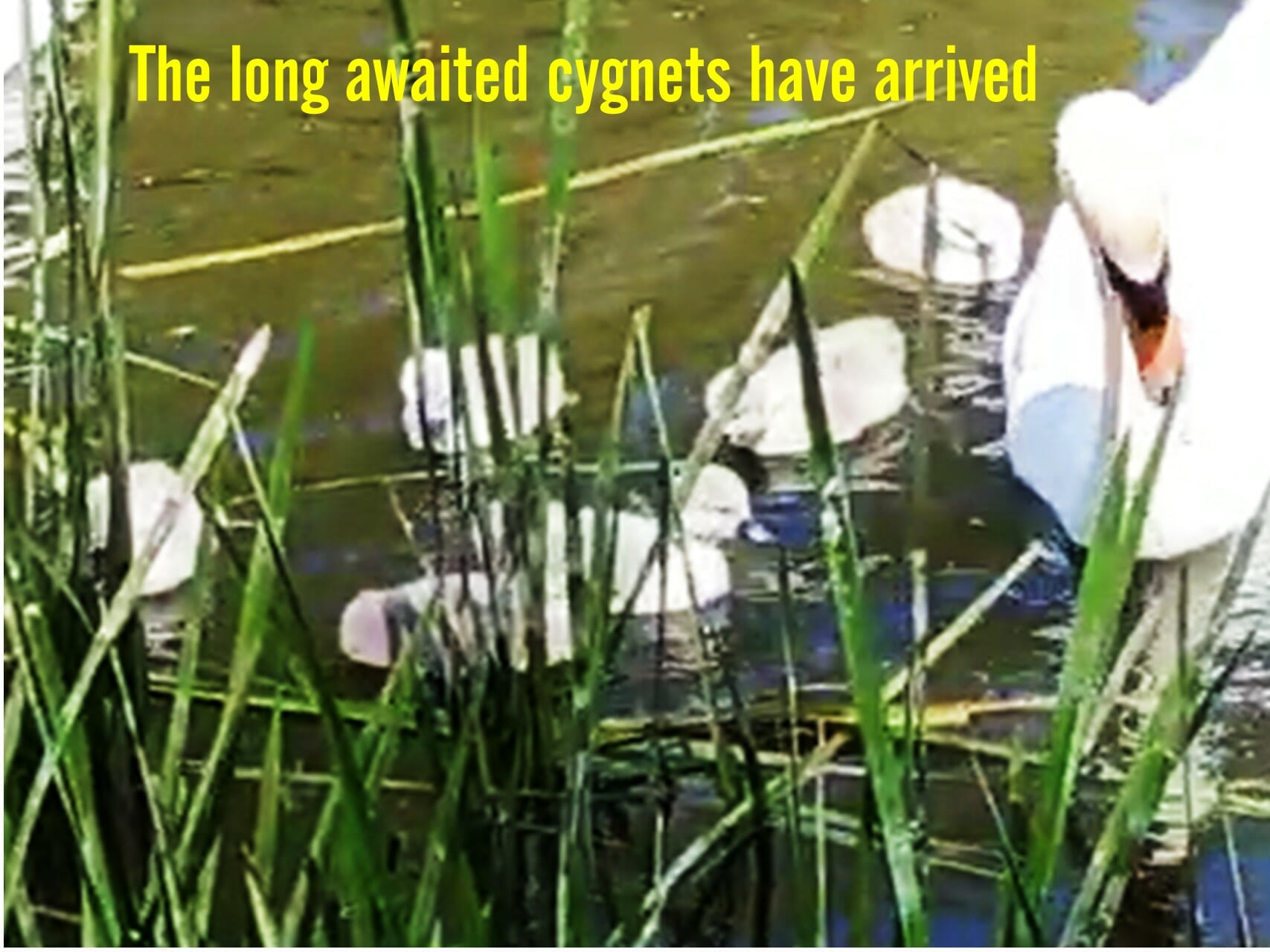 Ps   The baby swans have appeared and were introduced to the water. A sacrament of nature.

Seamus Ahearne is reflecting on life as it goes on all about us. “To look around is essential. To see. The birds. The buds. The wind. The hills. The air.  The underground. The people. Gratitude. Appreciation. God-moments and Good-moments. Our attention has to be on what we have and what we have been given.”

Building a bridge from the past to the future Western People 16.3.21 The pope, someone said to me last week, looked ‘well shook’ after his visit to Iraq. And he…

Seamus Ahearne takes time out to reflect.
“all of us should stop finger-pointing and blaming and freshen up this Church where somehow God still speaks despite the mess we are often in. Our vocation is to reach out and touch the heavens and then to be a poet of faith.”

Brendan Hoban, in this reflection published in the Western People, explores what it is about Good Friday that  still resonates with our lives.